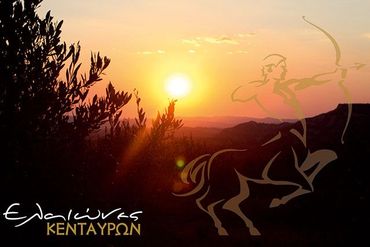 According to mythology, the goddess Athena donated to the Athenians the first olive tree in the world, in the struggle between the gods for the emergence of the city's patron. According to legend, the olive tree grew where Athena struck the spear. But Hercules, having completed 12 labors, he planted an olive tree in the temple of Hera in Ancient Olympia, from which it was made the crown (kotinos) the crown with which crowned the winners of the Olympic Games.

Going in history, the Mycenaeans offered oil to the gods, Hippocrates used it as a medicine, while Aristotle considered olive growing science.

Olive oil is the basis of the Mediterranean diet and one of the healthiest foods. The rich content of only unsaturated fat and antioxidants protects the body from oxidative stress, an important aging factor. Several studies indicate that also relates to the reduction of cardiovascular diseases, the "bad cholesterol", triglycerides and blood pressure.

Also, according to research done in 2014 by the University of Madrid, in countries the consumption of olive oil is widespread, it lowers the frequency of osteoporosis. Finally, few studies are suggesting that olive oil contains substances that act protectively against various forms of cancer.

Besides all of our health, this oil is an ally of our beauty. Thanks to the anti-inflammatory properties, helps fight skin redness caused by acne and other skin conditions such as eczema.

Still, thanks to its moisturizing properties, is an ideal mask for hair and a good way to remove makeup at the end of the day. Also, the content of vitamins, minerals, and trace elements make it a key ingredient in anti-aging creams and facial masks, which give nourishment and hydration.

Who were the Centaurus

According to mythology, the Centaurs were creatures with horse bodies but with chests, arms, and a human head. After their victory against the Lapiths (/ˈlæpɪθs/; Ancient Greek: Λαπίθαι), they led to Ilia and captured Foloi, from where they attacked to the local residents and passers.

The forest Folois was the kingdom of the good centaur Pholus, son of Silenus, and the nymph Melia, who gave his name to the area. The Pholus hosted the mythical hero Hercules when he persecuted the Erymanthio boar.